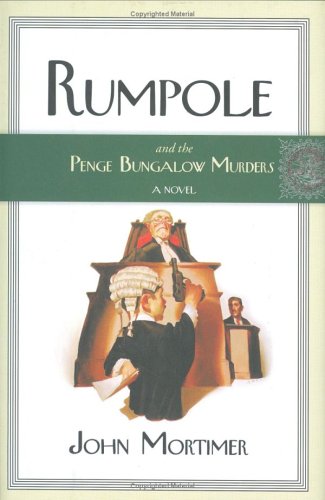 RUMPOLE AND THE PENGE BUNGALOW MURDERS

Mortimer's beloved barrister, Horace Rumpole, at last tells the tale, hitherto mentioned only in passing, of the Penge Bungalow murders, the case that made his reputation as a defense lawyer decades ago. Simon Jerold stands accused of shooting his father, a bomber pilot during WWII, and an RAF buddy of his father's some hours after a quarrel in which Simon threatened his father with a German Luger. Simon appears headed for the gallows with perfunctory defense from C.H. Wystan, Rumpole's by-the-book head of chambers. Leave it to young Rumpole, an inexperienced "white wig," to see a chink or two in the prosecution's case and step up to Simon's defense, even at the risk of ruffling his supercilious superior's feathers. Subplots include the farcical circumstances that lead the romantically challenged Rumpole to become engaged to Wystan's daughter, Hilda (aka "She Who Must Be Obeyed"), and his introduction to the felonious Timson family, one of whose hapless members he defends in an unrelated burglary trial—which incidentally provides a clue to a key motive of one of the principals in the murder case. If a British airman circa 1942 committing treason in the belief that Hitler was going to win the war isn't entirely convincing, Mortimer ( ) never fails to delight.