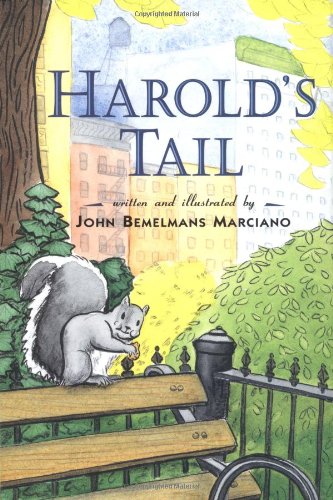 Harold, the squirrel narrator of Marciano's () sluggish story, lives in a small park in Manhattan, where he happily devours the food that visitors throw him. Then he encounters Sidney, a rat, who accuses Harold of putting on airs and tells him, "You ain't no better than me. In fact, the only difference between you and me is that fluffy tail of yours." Reluctantly, Harold agrees to participate in Sidney's "little experiment": to prove that Harold's "precious people friends" only love him because of his bushy tail, the rat shaves off the fur on the squirrel's tail and glues it onto his own. Now that Sidney looks like a squirrel and Harold a rat, the people in the park dote on the former and shun the latter. Miserable, Harold flees the park and joins up with a pack of rats. Unfortunately, tedious details of their nocturnal activity comprise much of the ensuing narrative. If there is a message here, about the superficial importance attached to appearance or about being true to one's self, it is muddled—and buried under too much trash-scavenging. Final artwork not seen by . Ages 8-12.