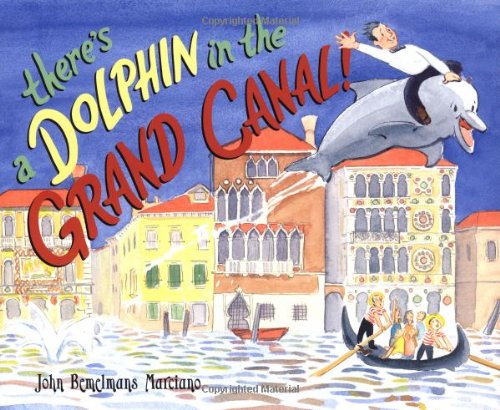 There's a Dolphin in the Grand Canal!

Marciano's ( ) tale begins with a dry guidebook tone, before introducing Luca Buca, living in Venice with his parents who run a café ("Poor kid—look at him, so bored and lonely, stuck in here all summer with his parents"). Each afternoon, Luca passes through St. Mark's Square to mope by the Grand Canal. The scenery is Marciano's strong suit, with meticulously painted brickwork and golden touches on the Doges' Palace rooftops. One afternoon, a dolphin splashes Luca and performs "a reverse backflip with a corkscrew finish." But no one else notices: the tourists bury their noses in guidebooks and Luca's father condescendingly lectures the boy on fish varieties found in the Grand Canal (none of which is dolphin). When Luca drags his skeptical parents to the Canal (" "), no dolphin appears ("I'm sure it was a very nice dolphin too, dear," his mother says). The minute they turn away, the dolphin arrives, boards Luca on its back, "and they took off... !" Marciano's human characterizations are uneven (at times Luca looks 10, other times 25), but he does treat readers to an aesthetically pleasing tour of the city, via Luca's wild ride, through the arches of the bridge at Rialto, past laundry lines on a quaint back street and (literally) over the Bridge of Sighs. Italian words pepper the tale, as do tourists' comments in various tongues. This dolphin-and-boy adventure makes for an entertaining introduction to Venice. Ages 4-up.