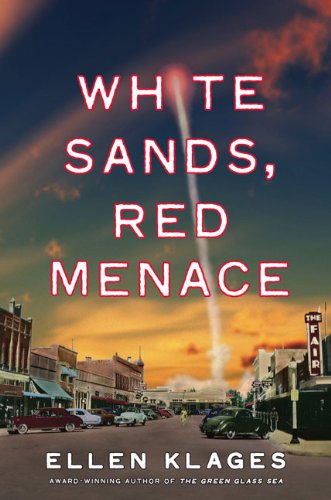 Picking up a year after the close of , this strong sequel finds Suze and Dewey (short for Duodecima) living near Los Alamos with Suze’s scientist parents, who with Dewey’s late father had helped build the atom bomb. In the aftermath of Hiroshima, Suze’s mother has begun organizing scientists against war, while her father throws himself into his work to maintain the U.S.’s edge over the Soviets and “Uncle Joe.” This tense drama weaves family conflict with difficult political history: after a Thanksgiving dinner, Suze discovers that the guest her father has invited, an ex-Nazi who is now his colleague, helped run a German bomb factory where 20,000 slave laborers died. Equally gripping are the ongoing, rarely voiced struggles at home, not just between the parents but between the girls and their uneasy rivalry for Suze’s mother’s attention and affection. Klages has a gift for opening moral dilemmas to middle-graders—she includes (and sources) just enough information to engage her readers without detracting from her characters’ emotional lives. Once again she offers up first-rate historical fiction. Ages 10–up.