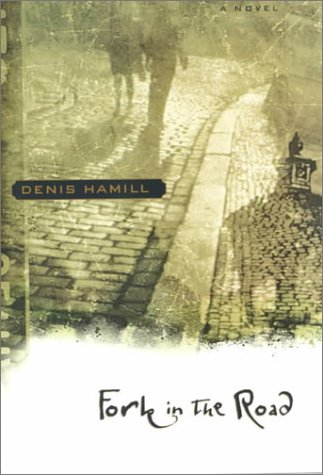 Fork in the Road

There is never a dull moment in this charming story of a young Irish-American filmmaker who, while doing research in Dublin, encounters an extraordinary young woman. In a delightful ""meet cute"" scenario, Colin Coyne feels his pocket being picked in a Dublin pub and captures a tousle-haired colleen, Gina Furey, who bluffs her way out of trouble, but not out of his thoughts. Gina turns out to be a Traveler, part of the Irish gypsy underground. She and her family are criminals--pure trailer trash. Colin falls for her, anyway, and soon she is pregnant (""I use Irish birth control,"" she tells the stunned Colin. ""Five Our Fathers and Five Hail Marys""). Colin smuggles her and her four-year-old daughter into the U.S., where his film career is just starting. Using his liaison with Gina as the basis for a screenplay, he is confounded when she turns out to be truly one of the Furies. Baby Shamus is born, cementing their relationship--Colin made a deathbed promise to his mother never to abandon any child he fathers--but Gina's behavior becomes more and more erratic and violent. In several sadly hilarious scenes, Gina's rapacious relatives descend in droves, at Colin's expense, on Colin's American home, pillaging and pickpocketing at will in the community. One sympathizes with Colin's predicament, as real life proves much more difficult than his imagined screenplay, and one even understands Gina, who is beautiful, sexy, intelligent and talented, but enjoys the chaos of her despicable family and life as a criminal. Hamill (3 Quarters and Throwing 7's) has perfectly captured the trill of an Irish brogue, and he loads the plot with remarkable twists, keeping readers in suspense until the final page of this lively, sad, humorous tale. Agent, Esther Newburg. Movie rights to Barry Levinson. (Feb.)
close
Details