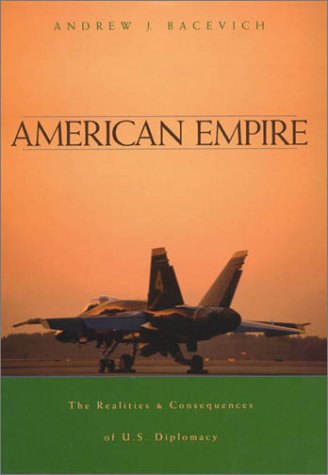 AMERICAN EMPIRE: The Realities and Consequences of U.S. Diplomacy

This small book's analysis of America's foreign policy in the post-Cold War era is unfortunately being eclipsed by current events. Bacevich, professor of international relations at Boston University, interprets America as the new Rome: committed to maintaining and expanding an empire acquired by design, not accident. He argues persuasively that the foreign policies of Clinton and Bush 41 reflected an essential continuity because all three administrations had essentially the same view of America's vital interests and how best to secure them. They accepted an American mission as the guardian of history, responsible for changing the world by making it more open and more integrated. They accepted an American global leadership, manifested by maintaining preeminence in the world's strategically significant regions. They accepted the necessity of permanent global military supremacy. While Bacevich finds no purpose is served by denying the empire, the important thing is that America behave wisely. Doing so, he argues, demands foresight, consistency and self-awareness. Bacevich derives his view from two long-neglected intellectual figures: Charles Beard and William Appleman Williams. Between them they developed the insight that American well-being depends on the effective functioning of a global economy, and simultaneous global adherence to certain behavior. Harmony of conviction and consistency of purpose has characterized overt American strategy from the days of Woodrow Wilson and Harry Truman, and Bacevich asserts that the Bush 41 and Clinton administrations maintained an empire built less on coercion than on persuasion. When something more is necessary, "gunboats and Gurkhas" suffice—e.g., cruise missiles and similar long-range precision weapons systems, used in cooperation with local forces enhanced by American expertise and material. That does not seem to describe the war the U.S. is preparing for now.