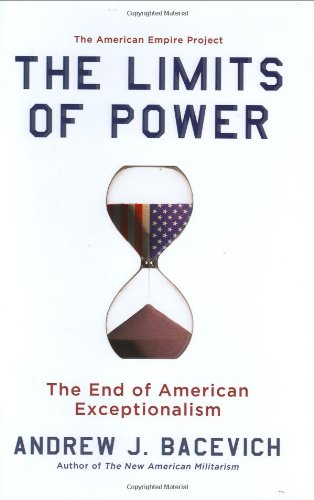 The Limits of Power: The End of American Exceptionalism

In this caustic critique of the growing American “penchant for empire” and “sense of entitlement,” Bacevich ( ) examines the citizenry's complicity in the current “economic, political, and military crisis.” A retired army colonel, the author efficiently pillories the recent performance of the armed forces, decrying it as “an expression of domestic dysfunction,” with leaders and misguided strategies ushering the nation into “a global war of no exits and no deadlines.” Arguing that the tendency to blame solely the military or the Bush administration is as illogical as blaming Herbert Hoover for the Great Depression, Bacevich demonstrates how the civilian population is ultimately culpable; in citizens' appetite for unfettered access to resources, they have tacitly condoned the change of “military service from a civic function into an economic enterprise.” Crisp prose, sweeping historical analysis and searing observations on the roots of American decadence elevate this book from mere scolding to an urgent call for rational thinking and measured action, for citizens to wise up and put their house in order.