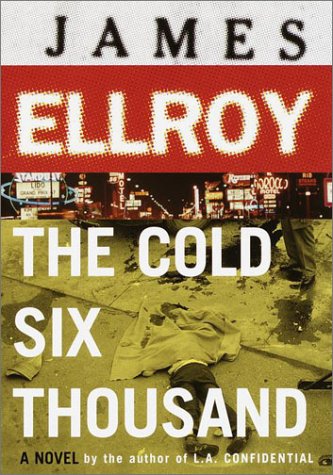 . It's easy to elbow Ellroy, but that's only because he's got his act down. His new novel is a career performance. Running from one day of infamy (11/22/63) to another (6/5/68) and a bit beyond, it limns a confluence of conspiracies beginning with the shooting of JFK in Dallas and ending with the death of his brother in L.A. In between, Ellroy depicts the takeover of Vegas by the Outfit, with Howard Hughes as its beard; the escalation of the war in Vietnam and the takeover of heroin cultivation there by the Mob; the enmity of J. Edgar Hoover toward Martin Luther King, leading to the King killing months before bullets topple Bobby K. Big names play roles huge and small: the aforementioned celebs; Bayard Rustin, an FBI blackmail target for his homosexuality; Sal Mineo, a Mob blackmail target for carving up a male trick; Oswald, Ruby, SirhanSirhan, James Earl Jones, patsies all; Sonny Liston, sliding from world champion to world-class thug; assorted "Boys," including mobster Carlos Marcellos, the spider at the center of the web. While great men pull strings, however, smaller men not only dance but sometimes tug back; a wide cast of characters—mercenaries, twisted cops, thieves, financiers, pimps, whores and cons—keep the conspiracies chugging while indulging in assorted vanities and vendettas. What emerges is a violent, sexually squalid, nightmare version of America in the '60s, one that, through Ellroy's insertion of telephone transcripts and FBI and other documents, gains historical credence. With Ellroy's ice-pick declarative prose (thankfully varied occasionally by those documents), plus his heart-trembling, brain-searing subject matter, readers will feel kneed, stomped upon and then kicked—right up into the maw of hard truth.