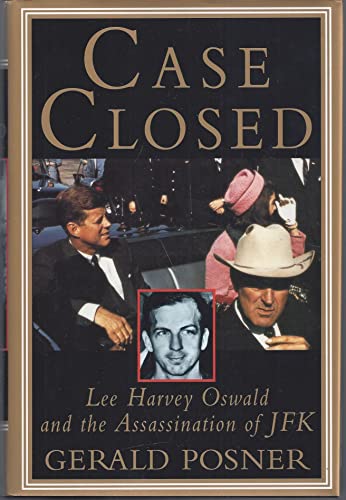 Case Closed: Lee Harvey Oswald and the Assassination of JFK

Posner, a lawyer and investigative reporter ( Mengele ), has set himself a major task here and brought it off with considerable panache. In the face of a multitude of assassination books propounding dozens of theories, all of them critical of the lone-assassin/no-conspiracy case, he has come out square for Oswald as the sole culprit. Posner propounds--and offers good evidence for--just three shots, all from Oswald in the Book Depository, and spends nearly half the book on a closely detailed examination of the life of that unhappy and, he claims, ultimately paranoid young man. He also scrutinizes every minute of the time Jack Ruby spent between the assassination and the moment he shot Oswald in the police garage, and cannot find that Ruby's act was other than an outburst of spur-of-the-moment rage born of unexpected opportunity. Posner does not ride, testy and rough-shod, over objections , as lesser proponents of Warren Commission orthodoxy do. He scrutinizes many of the conspiracy theories and theorists carefully, sometimes even with respect, but inevitably finds them wanting. If someone has changed his or her story later (as many witnesses did), he tends to give more credence to their first impressions, before the conspiracy theories tempted them to doubt themselves. And in many cases--perhaps too many--he finds that people whose stories have been widely relied upon by writers are mistaken about time or place, crazy, delusional or otherwise unreliable. About New Orleans D.A. Jim Garrison, the hero of the movie JFK , he is merciless, laying out an endless trail of his lies and exaggerations. Posner is occasionally critical of the Warren Commission and the later House Select Committee investigations, but makes extensive use of their findings, adding to them much recent expert testimony--and technological enhancements of visual and auditory material--to which they did not have access. While not exculpating the FBI or the Dallas Police for their erratic work and lack of cooperation, he casts no suspicion on them, or upon the CIA (whose statements he seems to accept uncritically), for possible involvement in, or foreknowledge of, the crime; and he does not even try to explain why a motorcade so bereft of elementary security precautions was allowed to proceed. Still, this is a painstaking and remarkably thorough presentation of what has become an utterly unfashionable approach. There are extensive notes on sources, and some innovative and helpful graphic reconstructions of the shooting scene and the shots. First serial to U.S. News and World Report. (Sept.)
close
Details