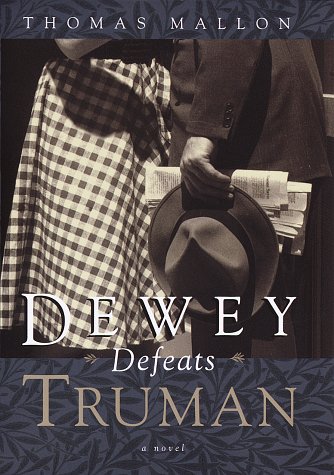 The title of this beautifully controlled novel, Mallon's fourth, refers to the famously inaccurate newspaper headline that appeared the morning after Election Day in 1948. But when the narrator here tells us that the clock tower in Owosso, Mich., chimes at three minutes past the hour in the summer of 1948, we know it's dead-on. We know it because Mallon has so meticulously re-created a time and place that even trivial data has the force of nothing less than truth. Mallon, who reconstructed a New York childhood in Aurora 7 and Civil War Washington in the much-praised Henry and Clara, here turns his exacting research and sure storytelling skills to the home town of Thomas E. Dewey, who in this summer of '48 is the runaway favorite to win the presidency from Harry Truman in November. Although Dewey is long removed from Owosso, the town is beside itself with civic pride, and plans are afoot for a Dewey Walk, a promenade along the river that will feature a diorama of ""President"" Dewey's life and accomplishments. However, there is a secret buried in the riverbank--the body of a young man whom everyone in town (with one important exception) thinks left the area 50 years ago, but who in fact took his own life in the face of scandal. The elderly Horace Sinclair carries the secret and lobbies to block the Dewey Walk while hoping for a Truman victory. Around this drama are the seemingly innocent romances of the community, which rather quaintly tease the slight political tensions among its citizens. The hustling, go-getting Billy Grimes has a crush on Margaret Feller, who pines after the mysterious, handsome Tim Herrick, whose mother melodramatically mourns the loss of her war hero son, Arnie, who died in France in 1944. When Tim disappears (he actually provisions a show plane and flies out of town), his mother blames Frank Sherwood, a teacher at the high school distrusted for his effeminacy, who had befriended Tim. And then there is the romantic triangle of Anne Macmurray, a wholesome woman who works in the bookstore, Peter Cox, a well-to-do, dashing carpetbagging Republican vying for a coattail's win in Owosso's congressional district, and Jack Riley, the principled labor union organizer who is all-Truman. As Election Day draws near, the whereabouts of Tim Herrick, the quiet discovery by Peter Cox of the town secret, the ambivalence of Anne toward her betrothed, Jack Riley, and the reconciliation between the grieving Jane Herrick and Frank Sherwood--who, it turns out, was in love not with Tim but with her son Arnie--makes for a drama that all but obscures the greatest upset in the history of presidential politics. In the end, a secret is returned to the riverbank and a suppressed sexual identity is liberated; and politics, though the occasion for these developments, is proved to operate at a distance from the human heart. Mallon's complicated meditation on the trials of private and public identity is beautifully fashioned. Its tale of yesteryear tells America a little bit about what it is today. (Jan.)
close
Details