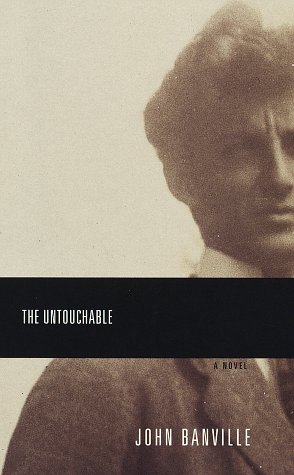 Banville (The Book of Evidence; Athena; Ghosts) has always been a highly stylish writer whose prose is almost tactile in its loving delineation of lights and weathers. He sees as an artist does, but the actual structures on which his thrillingly sensuous writing is draped have been, for the most part, a bit fey and elusive. The Untouchable changes that perception overnight. This is an extraordinary breakthrough novel in which keenly observed character and often farcical, sometimes poignant action are developed to the point where they compel as much admiration as the still exquisite language. It is, in fact, comparable to the work of John Le Carre at the height of his powers, and in its tragi-comic aspects is in a class with the recent Tailor of Panama. Victor Maskell, clearly based on Britain's Sir Anthony Blunt, is one of that generation of British spies who came of political age at Cambridge during the 1930s and became double agents, working both for the British Secret Service during WWII and, for most of their lives, for the Soviet Union as well. Guy Burgess and Donald Maclean, key representatives of that generation, are also pictured here under fictionalized names and so, in a stunningly lifelike (and unflattering) portrait, is Graham Greene. The book begins as Maskell is betrayed as a traitor, he knows not whom, and takes the form of an extended reminscence about his life, ostensibly told to a mousy would-be biographer. (If that sounds like a hoary notion, Banville has a surprise up his sleeve even here.) Maskell--elusive, cunning, cynical and surprisingly sentimental by turns--is profoundly fascinating. In the process of his self-revelation, he offers a keen portrait of the spy's ultimate dissociation from his true self. Much of the book is uproariously funny, as a sort of offhand upper-class comic opera. Maskell's raffish friends, his in-laws, his wife, his Russian handlers and his male lovers (later in life, he realizes he is basically homosexual) are often figures of fun who then reveal sudden, appalling depths of feeling. It also evokes with startling immediacy the atmosphere of prewar and wartime London and, in one memorable scene, an uncannily believable encounter with King George VI (like Blunt, Maskell is Keeper of the Royal Pictures). It is seldom one encounters as keen a literary intelligence as Banville's embarked upon as compulsively entertaining--and thought-provoking--a tale as this. (May)
close
Details