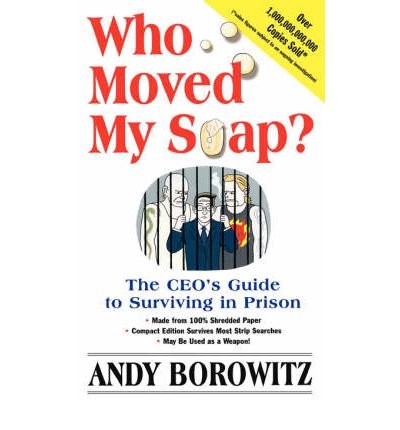 WHO MOVED MY SOAP?: The CEO's Guide to Surviving in Prison

Rather than a direct takeoff on the bestseller (almost a parody in itself), this slim but very funny release riffs on the inexhaustible genre of business books. To Borowitz, a veteran humor writer who contributes to the and other publications, the buzzwords, nostrums and exhortations of business life can just as easily be applied to the slammer—where more and more corporate criminals may find themselves over the next few years. "Being thrown in a cell hasn't kept them from thinking outside the box," he declares of CEO convicts who have new opportunities to "grow a new business" behind bars. His narrator, the former head of "the energy-telecom-pharmaceutical giant called Shamco International," huffs that the jury at his trial failed to grasp that "the fiduciary obligation of every CEO [is] to maintain a high-end lifestyle for the good of the company." He comes to prison prepared, recognizing that the CEO lifestyle is prisonlike in itself ("tied up in meetings"), contains even more "creepy jargon" and even offers a similarly "paucity of meal choices." Borowitz offers a Zagat-like guide to prison food: "Marion's detractors say the food's 'not worth getting stabbed on line for.' " The "Seven Habits of Highly Effective Prisoners" include "Begin With the End in Mind" (as in start prison riots to "empower" yourself, but blame others, so long as they can't identify you). In "Bringing Six Sigma to Sing Sing," the narrator recounts how he started his own prison jumpsuit fashion empire, only to be thwarted when his chosen interim CEO (Snake, his cellmate and personal document shredder/eater) betrayed him. Another chapter has Clarissa Hoyden (a takeoff on Martha Stewart, with a dash of Lizzie Grubman) explaining how the female CEO convict can deploy foul-mouthed prisoners in a phone sex business. Not every joke works, but that's no crime.