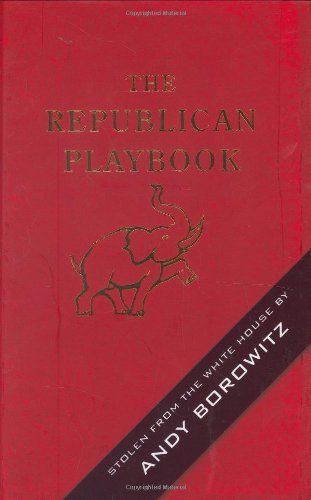 Uber-humorist Borowitz ( ) churns out humor at a fast clip—and here is another timely example. Filled with short memos, talking points and marginal notes from its purported possessor, George W. Bush, this is the latest update of a playbook that claims to have changed very little in recent years—except that the Internet has made it easier to "spread lies and distortions." It advises candidates to scare voters with a doctored photo of a future Democratic-controlled Supreme Court featuring the Dixie Chicks, Michael Moore and Alec Baldwin. There's a devastating sketch about how the Republic Party favors a credible voting process—in Iraq—followed by a somewhat labored Bruce McCallesque set of drawings of Republican-approved voting machines. A hilarious set of photos moves six degrees from Hillary Clinton to Osama bin Laden and Kim Jong Il. A Republican-to-English glossary translates "personal responsibility" to "welfare cuts" and "My fellow Americans" to "My fellow evangelical Christians." More silly, but still amusing, is a "Democrat to French conversion chart," rendering Joseph Biden as "Giscard Boudin." Enough serious points are presented with humor—how the Republicans fool the public with black faces prominent at their conventions, for example, or where the "war on terror" breaks down—to make this book more than just a diversion.