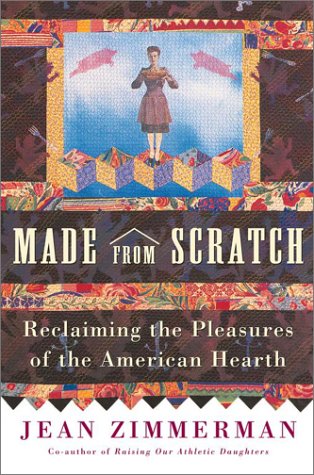 MADE FROM SCRATCH: Reclaiming the Pleasures of the American Hearth

In the past century, homemakers have become a dying breed. The domestic achievements of our mothers and grandmothers have been devalued and replaced by the easy options of fast food, hired help and prefabricated products of all kinds; meanwhile, the arts of cooking, needlework and gardening become the province of a dedicated few. Zimmerman () urges both men and women to honor and preserve the domestic achievements of our female ancestors. "In the small private act of stirring a pot of homemade soup or knitting a scarf for a loved one we preserve the rich heritage of the home and keep back the swelling tide of mediocrity and commodification that is fast replacing it—and, most important, nourish our own souls." Although Zimmerman asserts that revaluing "women's work" is a feminist act, her argument occasionally downplays the positive impact the feminist revolution has had on American women in the past four decades. In the end, Zimmerman advocates for a mild domestic revolution of her own: "I would like to see every person perform just one small domestic act." It's a startling request in its simplicity, and yet it highlights the very best that modern feminism has offered women: nowadays, for some women, to perform a small domestic act is a choice. Though the book's gender politics may raise a few hackles, the author offers a thoughtful and engaging defense of domesticity.