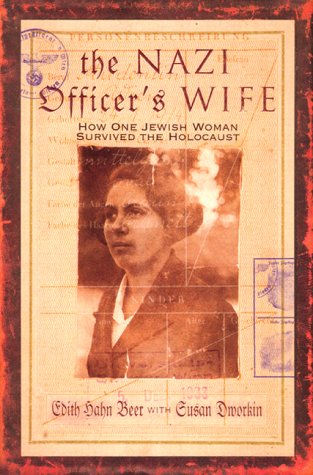 The Nazi Officer's Wife: How One Jewish Woman Survived the Holocaust

Born to a middle-class, nonobservant Jewish family, Beer was a popular teenager and successful law student when the Nazis moved into Austria. In a well-written narrative that reads like a novel, she relates the escalating fear and humiliating indignities she and others endured, as well as the anti-Semitism of friends and neighbors. Using all their resources, her family bribed officials for exit visas for her two sisters, but Edith and her mother remained, due to lack of money and Edith's desire to be near her half-Jewish boyfriend, Pepi. Eventually, Edith was deported to work in a labor camp in Germany. Anxious about her mother, she obtained permission to return to Vienna, only to learn that her mother was gone. In despair, Edith tore off her yellow star and went underground. Pepi, himself a fugitive, distanced himself from her. A Christian friend gave Edith her own identity papers, and Edith fled to Munich, where she met and--despite her confession to him that she was Jewish--married Werner Vetter, a Nazi party member. Submerging her Jewish identity at home and at work, Edith lived in constant fear, even refusing anesthetic in labor to avoid inadvertently revealing the truth about her past. She successfully maintained the facade of a loyal German hausfrau until the war ended. Her story is important both as a personal testament and as an inspiring example of perseverance in the face of terrible adversity. Photos not seen by PW. (Nov.)
close
Details