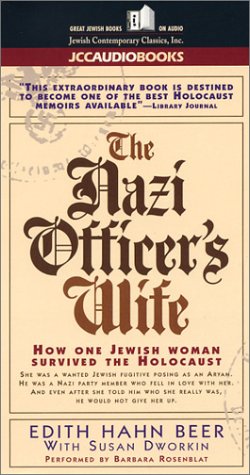 THE NAZI OFFICER'S WIFE: How One Jewish Woman Survived the Holocaust

In the 1930s, Edith Hahn was studying law at university, in love with her boyfriend and living with her close-knit, nonobservant Jewish family in Vienna. Her idyllic life ended abruptly when the Nazis took over, and she was sent to a labor camp in Germany. After obtaining permission to return to Vienna—and discovering that her mother was no longer there—Edith went underground and lived in terror as a fugitive until a Christian friend let her use her papers to create a fake identity. Incredibly, a Nazi Party member fell in love with her and married her, even after she told him her true identity, and she spent the rest of the war pretending to be an ordinary German . Audie Award–winner Rosenblat gives a compelling performance in the first-person role of Edith. She narrates the story in a light Austrian accent, which lends a ring of authenticity to her reading. At times, Rosenblat seems to become Edith: sighing with regret over a lost love, chuckling over a girlhood prank, her voice filled with hatred as she speaks of the Nazis and with pure terror when she comes close to being discovered. Indeed, readers might easily forget that this absorbing narrative is a memoir, not a novel.