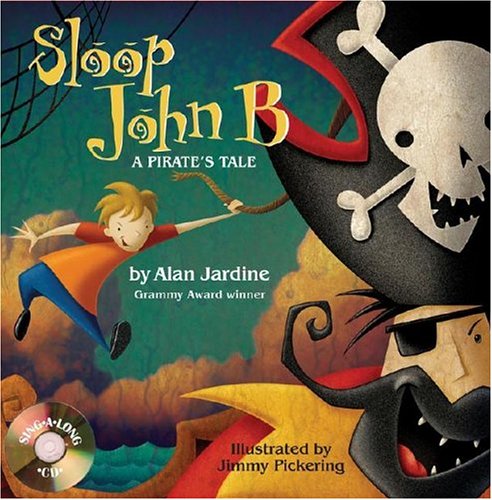 Sloop John B: A Pirate's Tale

Minus a couple of references to drinking and fighting, the Beach Boys' rendition of this traditional folk song makes for a jaunty seafaring story buoyed by Pickering's ( ) stylish, textured illustrations. A boy and his grandfather set sail on the titular vessel only to encounter a fog—and a pirate ship. After some quick-thinking derring-do, the boy rescues his grandfather from the wild-eyed pirate who would have him walk the plank, and a constable comes aboard to help further save the day. Though kids may need assistance with a few terms here and there, they will likely want to ride along at this story's good clip as penned by Beach Boy co-founder Jardine (who also provides music and vocals on an accompanying sing-along CD). But it's Pickering's often-dazzling mixed-media compositions that bring the watery setting to life. The compositions resemble cut-paper collage, and his characters seem to take on grand dimension upon close examination, popping out from dramatic backgrounds of sea and sky. Several inventive and humorous elements keep the fear factor at bay: the skull-and-crossbones on the pirate's hat changes expression on each page, and the villain's chartreuse parrot pal adds some animated distraction as well. Yo ho ho! Ages 4-8.