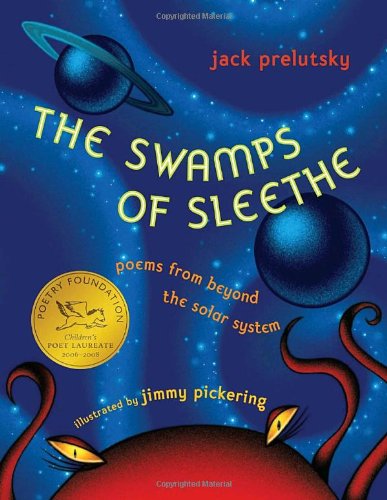 The Swamps of Sleethe: Poems from Beyond the Solar System

The nation's first children's poet laureate fills a galaxy with weird, scary planets: his 19 poems describe places and creatures you wouldn't want to visit. On planet “Lonithor,” for example, “demon birds... eviscerate their prey./ And when they've disemboweled you,/ They'll pick apart your face”; on “Ogdofod” the monopods “will snare you in their nets,/ Then process you and package you/ To feed their hungry pets.” Pickering's ( ) amusing illustrations suggest images for a Tim Burton movie. A tourist on “Drifig Prime” resembles a frozen Corpse Bride and someone who stumbles on Planet Grob looks a lot like Edward Scissorhands. Less broad in its appeal than most of Prelutsky's previous titles, this over-the-top intergalactic odyssey will mostly please kids capable of relishing horror and its send-ups (“You laugh till you wish / You'd expire of laughter, / And in that same second, / you mercifully do”). For added fun, about half of the planet names are anagrams; a key is listed at the end. Ages 8–up.