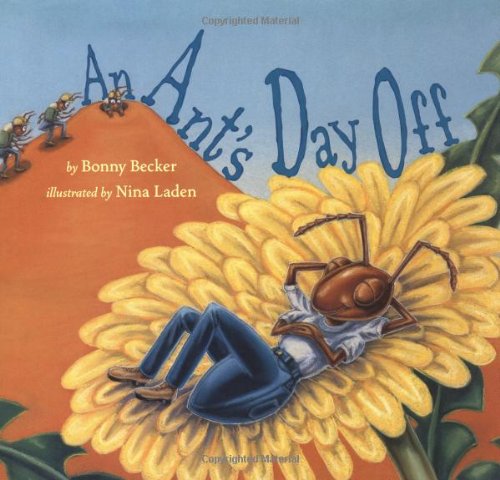 AN ANT'S DAY OFF

Youngsters who saw the movie will recognize the plot here: a worker ant finds there is more to life than heavy lifting. Bart, a sand ant, spends all his time doing construction jobs underground, in a brown, dim environment. Laden () pictures him in a yellow hard-hat, four-armed T-shirt and blue jeans that snugly fit his lower segment; all the ants wear this generic uniform. Bart has ideas of his own, however, and while shifting a "mound of sand... from Tunnel 929B to Tunnel 49A, he glanced up. High above was a glimmer of blue, far and away, and it called to him." To his pal Floyd's dismay, Bart scrambles into the open air. Outdoors, he explores a brook and naps on a sunny dandelion. But when hungry frogs, a zealous honeybee and a rain shower spoil his reverie, he must convince a grouchy guard ant to allow him into the hive. "If you'll pick up that moth wing and make it snappy, I'll let you back in," says the guard, whose mirrored goggles and silver-gray uniform give him a frightening authority. "Always bring back a bit of something.... That's what the others do." Becker's () conclusion hints at Orwellian overtones; Bart learns that mysterious "others" take breaks and atone by bringing home souvenirs. Even when Bart happily sneaks out a second time, taking Floyd with him, the impression remains that vacation is something to be stolen. Ages 4-8.