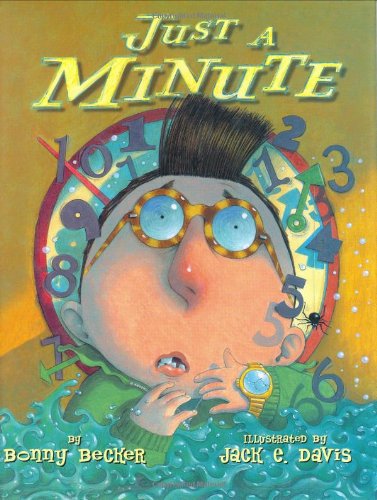 Johnny MacGuffin is tolerating a shopping expedition in Bindle's department store when Mother suddenly announces she's off to another floor with the dreaded words: "I'll be just a minute." Even though the bespectacled boy remains under the watchful eye of his Auntie Mabel, his mother's cheerfully vague promise plunges Johnny into an alternative dimension of anxiety worthy of . Thanks to Becker's () rhythmic, comically feverish prose and Davis's () merrily macabre mixed- media illustrations, readers get sucked into this vortex, right along with the hero. "Had a week gone by? Or even more?" wonders Johnny, as calendar pages whirl around his head and he grows stubble on his chin ("Was it snowing? And who was that fat man ho-ho-hoing?"). In the hero's surreal adventure, "He grew a foot or more, got married, had kids, and bought a house on the hill, waiting in Bindle's department store." Davis pulls out all his signature Grand Guignol stops as he depicts the fellow about to be swept away by rising seas—when at last Mother reappears with a new outfit, totally oblivious to her son's inner torment and ready to consume some more. As Rod Serling himself might say, Johnny's nightmare is over, but the shopping has just begun. This over-the-top tale about pint-sized fear and loathing will likely have kids nodding and grinning in recognition and agreement. Ages 4-8.