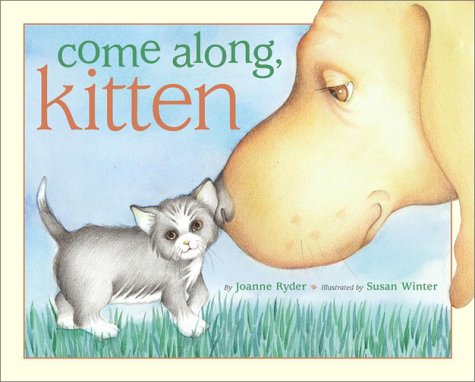 Perhaps an old dog can't be taught new tricks, but the elderly hound who narrates Ryder's () tale seems perfectly happy playing mentor to a gray kitten. It's a beautiful day in the country, and the dog offers to take the young feline for a walk (hence the title). But his charge shows characteristically cat-like mettle and prefers not to be led. No matter: "You don't want to follow?" says the mellow pooch. "Then I'll follow you." Their roamings make the most of the kitten's curiosity and spunk: she races a bumblebee, listens in wonder to a mouse concert (though youngsters may wonder why she doesn't chase them instead), darts among the vegetable plantings and stalks a cricket. The dog's wistful, "September Song"–like perspective seems oddly pitched for a young audience, and the soft-spoken text, which essentially describes the action of each picture, often lapses into maudlin preciousness: "Sniff every hidey-hole/ without any fear./ Be brave, daring kitten—/ just know I am near." The illustrations never quite capture the suppleness of a cat's movements, and the spreads rarely vary the perspective. But Winter () casts a soothing, golden glow over the watercolor spreads, and skillfully evokes the silky furriness of the protagonists' coats. She tempers the bathos of the text by giving the dog an attitude of bemused affection. Ages 2-6.