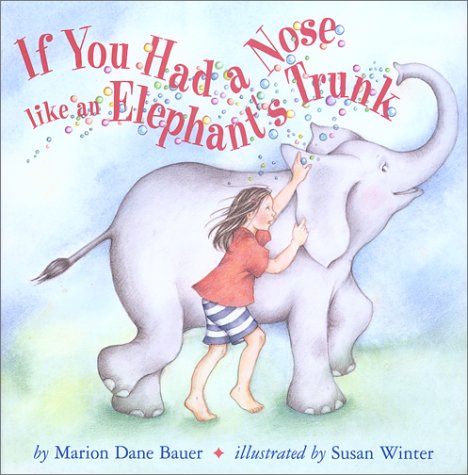 IF YOU HAD A NOSE LIKE AN ELEPHANT'S TRUNK

Bauer () and Winter () do some silly theorizing about what life would be like if a child possessed certain animal characteristics—and come up with some appropriately comic answers. "If you had a tail like a monkey's you could swing from your grandmother's chandelier," for instance, accompanies a painting of a spunky girl doing exactly that with a primate pal. Suggesting the sleeping habits of a shark, one scene shows the girl catching 40 winks on the bottom of the sea, cradled by the shark's curving tail. Unfortunately, Winter does not consistently offer this kind of literal interpretation for her watercolor vignettes, and so some of the pictures seem static. For example, in a scene that imagines what it would be like to have a porcupine's tail ("The bullies would all leave town"), Winter shows the girl walking the animal on a leash rather than embodying its prickly qualities herself, thus draining the idea of its humor. Still, the promising premise may be enough to tickle the fancies of imaginative youngsters. Ages 3-6.