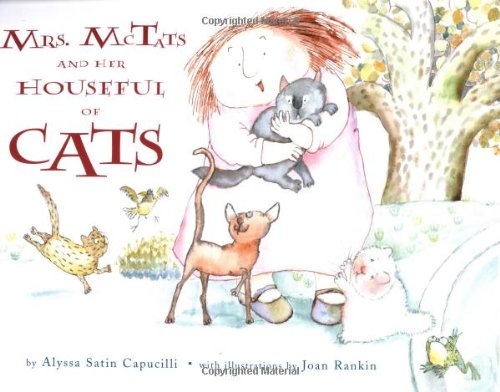 MRS. McTATS AND HER HOUSEFUL OF CATS

Capucilli (the Biscuit books) and Rankin () create a picture of cozy domesticity while incorporating a subtle lesson in letters and numbers. Mrs. McTats and her cat, Abner, lead a quiet life until the day two bewhiskered strangers turn up on their doorstep. The heroine doesn't hesitate. " 'Come in, my sweet dears,'/ said Mrs. McTats./ 'I'm sure I've got room/ for just two more cats." Thus Basil and Curly join the household. Three more show up the next day, then four, until the furry family extends to Pip, Quip and Rosebud on through Winnie, Xinnie and Yodel. Yet this abecedary tale leaves room for one final surprise; as Mrs. McTats puzzles over a feeling that "something was missing," she opens the door to greet not a cat, but a puppy named Zoom. With just the merest hint of pastel shades in her watercolors, Rankin artfully blurs the edges of characters and surroundings alike into softly rounded shapes. She dresses the pages with oval shrubbery, round rugs, overstuffed cushions and, most notably, the beaming, unflappable Mrs. McTats herself, as plump as her fetching, well-fed pets. Other comic touches include Abner hilariously mimicking his mistress's every expression and pose, and the faces in an heirloom portrait, which shift from surprise to bafflement to downright disapproval at the ever-expanding residents of the snugly appointed cottage. Ages 3-7.