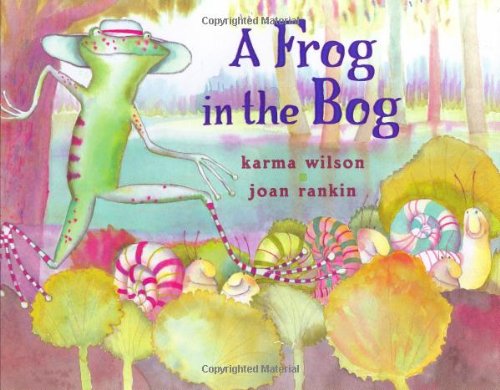 A FROG IN THE BOG

This rhyming picture book about an amphibian with a big appetite has as much bounce as its titular character's spring-action legs. The "small, green frog/ on a half-sunk log/ in the middle of a bog" has, apparently, an expandable belly that can keep up with his big eyes and quick tongue. He rapidly ingests " tick/ as it creeps up a stick," " fleas/ as they leap through the reeds," and so on, until his wildly bulging form comes to the attention of an alligator—whom the frog had mistaken for the half-sunk log. After a dramatic splash, all the creatures involved get their just deserts. Wilson's ( ) blend of early learning concepts, humor and wordplay make for a jaunty read-aloud. Rankin's ( ) sassy, intricately composed watercolors feature variegated, saturated backgrounds that often look appropriately bog-spattered and sun-dried (even, sometimes, tie-dyed). Throughout, various insects and the frog himself are more crisply rendered, allowing readers to appreciate their comic expressions. Ages 3-7.