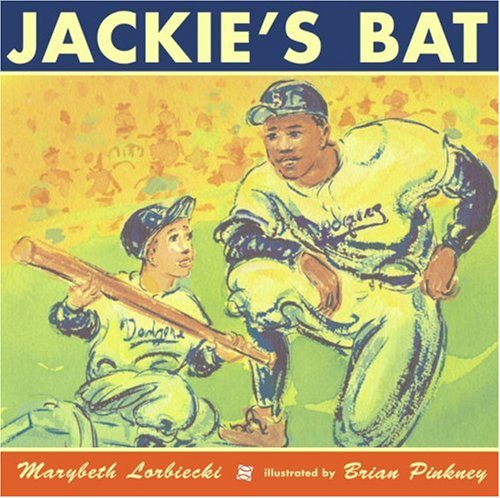 Narrated by the Brooklyn Dodgers' white batboy, Joey, Lorbiecki's ( ) heartwarming tale set in 1947 tells two parallel stories. The first is Jackie Robinson's difficult but ultimately triumphant first season in the major leagues, and the other is Joey's challenging, but also triumphant, battle against his own racism. With understated simplicity, Joey recounts the numerous indignities Robinson endures: taunts from opposing teams, pitchers aiming at him, hate mail, separate hotels and some insults inflicted by the batboy himself (e.g., Joey cleans the shoes of every player except Robinson because, the boy thinks to himself, "Pops says it ain't right,/ a white boy serving a black man"). Robinson confronts Joey: "There's people out there who don't/ treat me as a man 'cause my skin is black/.... They don't know what a man is." Joey chronicles Robinson's gradual progression from outsider to "one of the guys" as his teammates start defending and working with him. Foreground figures appear outlined in thick brushstrokes in Pinkney's full-bleed spreads, while background structures and people appear in paler lines and impressionistic dabs of color. The final scenes depict Robinson offering Joey his hand to shake, "one Dodger to another," and Pops wearing an "I'm for Jackie" button, saying, "That man's earned his place in history." These moments give added emotional weight to this straightforward but often moving re-imagining of how an American hero's struggle and achievement helped transform a nation. Ages 5-8.