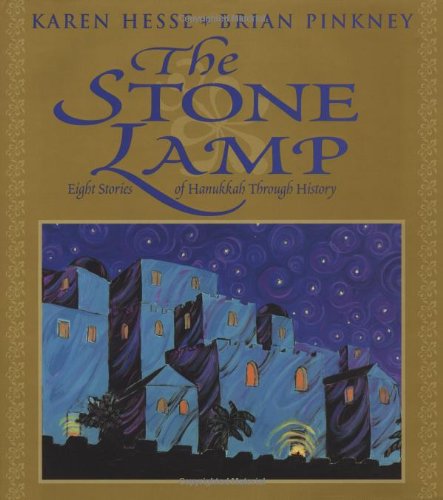 THE STONE LAMP: Eight Stories of Hanukkah Through History

Highlighting eight moments of crisis for the Jewish people in almost as many different centuries, this soul-searching, handsomely produced book is clearly important. It is not, however, festive. Newbery Medalist Hesse () imagines a child speaker for each of eight poems, one for each night of the celebration. For example, Tamara, in 1190 York, weeps as she chops onions and remembers her father, recently slain by mobs, then triumphs over despair (holding her baby brother, she says, "Though we have lost much/ yet this much remains"). Paired with each poem is text explaining each tragic episode, from the Inquisition to Kristallnacht; a tag after each poem limns each fictional speaker's fate. Pinkney () supplies some of his most striking work to date, capturing the luminosity of the holiday not just through the lights of candles or starry skies, but in the natural radiance of his characters. Ages 9-up.