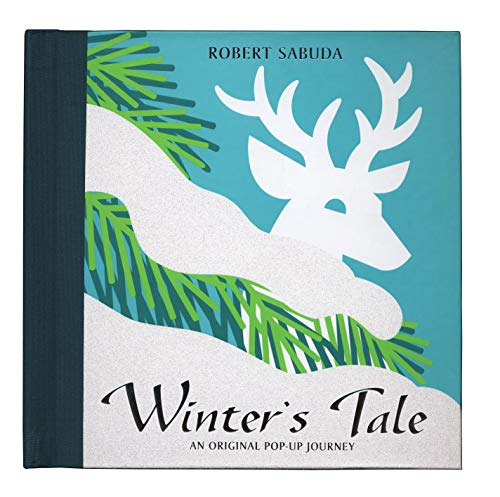 Iridescent glitter suggests powdery snowfall in this seasonal book by Sabuda, whose Christmas pop-ups and reflect a partiality to frosty whites and steely silvers. In the first of six spreads about a wintry forest, a 3D owl bursts from the pages and a gatefold lifts to reveal mice nesting safely in a hollow tree. A second spread features two foxes in a cave fringed with icicles, and the "snow shivers off a nearby bush," another pop-up detail that lifts to show a rabbit bounding away. In a third spread, clear plastic torrents slip down a vertical, mirrored waterfall as the pages open and close; a bear splashes and fish leap ("breakfast escapes in a flash"). At the conclusion, the winter itself says, "We spend all our days in a world dressed in white, but when the earth turns to green I must go.... I'll return for a visit next year." The closing spread encircles a simple cabin in an archway of pop-up pines; a pull-out tab sets holiday lights blinking in the cabin's transparent roof, a surprise reminiscent of the chirping in Eric Carle's . Despite the elaborate cut-and-folded paper, Sabuda never overcrowds his spreads, and he sticks to an earthy yet pristine palette including icy white, metallic silver, browns and evergreens. His deftly engineered book celebrates nature, and readers will wow to impressive pop-ups of deer, beavers and a moose. All ages.