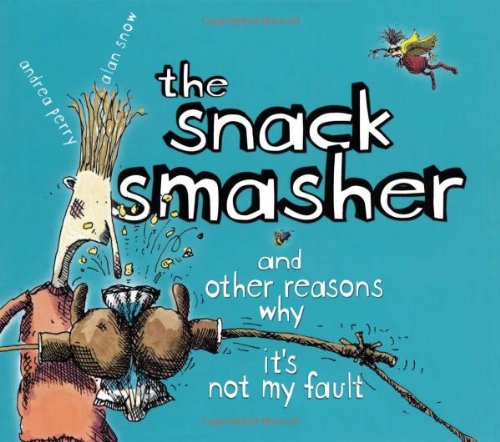 The Snack Smasher: And Other Reasons Why It's Not My Fault

In this rogues' gallery, British creators Perry and Snow (previously teamed for ) rhymingly introduce imaginary criminals. The title character, accessorized with boxing gloves and a steamroller, ensures that sweet and salty munchables are crumbled to bits, leaving "Brussels sprouts,/ liver, and/ spinach — intact?/ Dastardly Snack Smasher/ must have attacked!" His partners in crime include the Cap-Napper and Lid Lifter, who haunt kitchen containers, and the obnoxious Snorist, who "chose/ to sneak with his tuba inside your dad's nose." Snow pictures goofy masked marauders and their dismayed young victims; a lineup shows the innocent prey of the Scary-Hair Fairy, known to attack on "the night before pictures—those taken at school—/ when kids want their hair to look stylish and cool." Perry composes passable if not hilarious stanzas, and her words and Snow's images sometimes misjudge the audience; the deeds of Puzzle-Piece Eaters and Boot Removers go largely unexplained, and Ink Drinkers ought to drain something more modern than an inkwell or fountain pen. This volume give off an antique vibe, even though today's readers likely remain all too familiar with "an annoyer/ more commonly known as/ the Locker Destroyer." Ages 4-8.