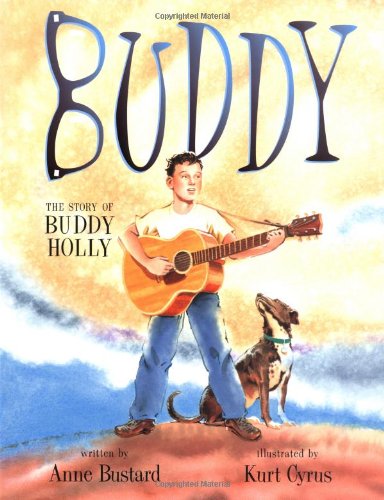 BUDDY: The Story of Buddy Holly

Bustard ( ) heralds the roots of a rock-and-roll legend in this animated tribute drenched in Texas twang. The story opens with Buddy Holly's mostly typical boyhood and his musical beginnings. "Ooooo-eeeee, could his kin sing. At night they'd raise soaring-to-the heavens hymns plus toe-tappin', boot-stompin' western tunes." The drawl-studded prose seems overdone at times, with musical references (e.g., "It was country, gospel, and blues all fired into one. ") likely to soar over the heads of youngest readers. Even those familiar with the musician's career may be caught offguard by the narrative's quick shift from his sixth-grade dabbling on the guitar to a weekly gig on the radio at age 17, just a few pages later. However, Cyrus's ( ) watercolor-and-colored-pencil illustrations reflect the heightened energy of the text and incorporate details of the era. One spread of Holly's childhood features vignettes of baseballs, slingshots and comic books, along with onomatopoeia that foreshadows his musical ear: "Peltin' cans with his slingshot. ... Readin' comics. ." In another, music notes stream from an old-fashioned radio, float across the spread and form the backdrop for Holly's quartet in the recording studio. Though the singer's early death (at 22) is not mentioned in the story (an author's note chronicles his life in more detail), a parting illustration shows an ethereal image of Holly's face in the moon, among floating 45 records. Those already familiar with the rock-and-roll crooner will better appreciate this lengthy tale and its quirky phrasings. Ages 5-9.