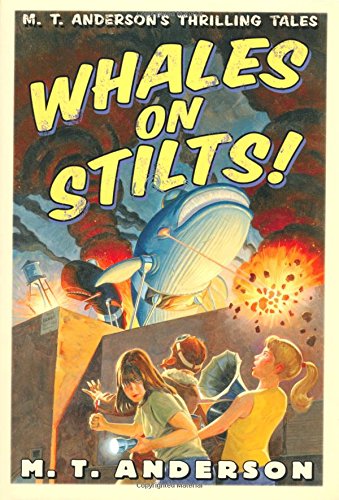 An intrepid trio must defeat an insidious plan to use whales (equipped with metal stilts and laser-beam eyes) in a takeover of the state capital—and then the world!—in this highly wacky novel. Anderson ( , reviewed above) sets a comic tone from the start: "On Career Day Lily visited her dad's work and discovered he worked for a mad scientist who wanted to rule the earth through destruction and desolation." Lily's father, like all the adults in the novel, is blissfully unconcerned about the ludicrous events going on around him (e.g., his boss, Larry, wears a grain sack over his head and extends a blue, rubbery hand when he meets Lily). Her father dismisses the heroine's fears when Larry pronounces that he plans to literally "take over the world" ("Honey, sometimes adults use irony. They don't really mean what they say"). Introspective, shy Lily then turns to her two more brazen friends, each the subject of a successful children's book series (the book's humor is very self-referential—for instance, awkward Harcourt writers follow them around asking for details of their exploits). Armed with an array of adjectives, non-sequiturs, bizarre asides, irrelevant footnotes and running gags, Anderson sends up decades of children's book series, and creates a hysterical tale of his own. Cyrus's meticulously rendered black-and-white illustrations riff on comic books and '50s-era advertisements, escalating the humor factor in this highly accessible volume. Ages 10-up.