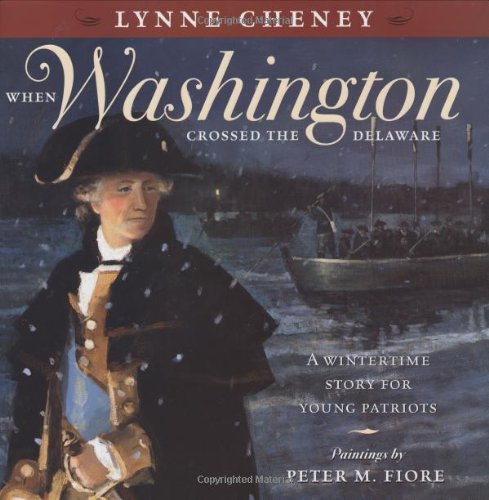 WHEN WASHINGTON CROSSED THE DELAWARE: A Wintertime Story for Young Patriots

Cheney ( ) serves up an inspiring slice of U.S. history in this account of a pivotal event in the American Revolution. With a generous smattering of quotes from primary sources, the author describes Washington's crossing of the ice-encrusted Delaware River on Christmas night, 1776, as he led 2,400 men from Pennsylvania into New Jersey and defeated British-hired Hessian soldiers at the Battle of Trenton. At times, the narrative awkwardly jumps ahead (in the midst of the surprise attack on Trenton, the author intersperses biographies of 19-year-old Capt. Hamilton and then 18-year-old Lieut. James Monroe). But if the leaps slow the momentum somewhat, these facts will nonetheless fascinate readers, as will some of the more familiar—undeniably powerful—details (e.g., many of the American troops taking their prisoners back over the river to Pennsylvania "marched without shoes and left bloody footprints in the snow"). The author underscores Washington's charisma, bravery and brilliance as a military tactician with examples of how he rallied his exhausted troops for a subsequent, successful surprise attack on British General Cornwallis's army in Princeton on January 3. Fiore's ( ) midnight landscape of the lone British soldier keeping watch on the fires of the surreptitiously vacated American campground underscores the dramatic strategy. The multi-textured, effectively shadowed oil paintings simultaneously capture both the dire circumstances and elegance of the soldiers, and deftly do justice to this history-altering event. A source note cites the references to the elucidating quotes from Washington and others. All ages.