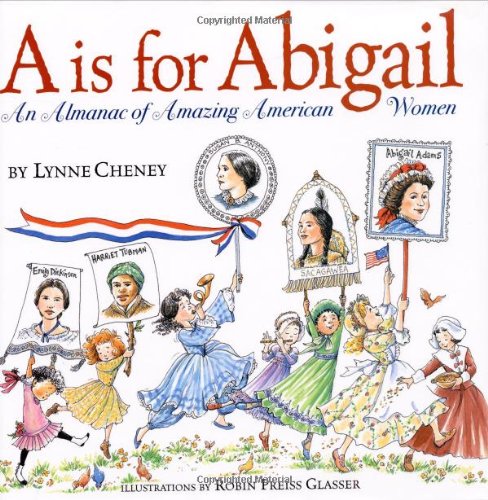 A IS FOR ABIGAIL: An Almanac of Amazing American Women

The follow-up to this team's outshines their debut as it spotlights American "women achievers" in many areas. The Second Lady devotes a handful of pages to individuals ("A is for Abigail Adams, who knew that women should be heard"; Emily Dickinson gets a full-page dedication for "D"). More often, however, she uses a single name as a springboard to a thematic spread introducing others with similar accomplishments ("K is for Mary Kies and other inventors and entrepreneurs") or designates a letter for a particular vocation ("E is for the Educators, the women who taught us well"). In addition to politicians and writers, the book also acknowledges scientists, artists, athletes and mathematicians. Several vague entries slightly weaken the book's thrust (e.g., "S is for the Sixties and Seventies and the Second Wave" refers to the "second wave" of the struggle for equal rights for women, yet offers no specifics; "V is for Variety" is followed merely by the question, "Who can count all the things girls can grow up to be?"). Concluding notes flesh out the information provided on most of the pages, and a plethora of strong quotes add women's voices to this light-hearted history lesson. Rendered in black ink, watercolor washes and colored pencil, Glasser's creative illustrations brim with imaginative and playful details, and her likenesses of the many famous personalities are often uncanny. The letter "P" inspires the visual pièce de resistance: a double fold-out enables readers to open an elegant theater curtain on a broad cast of performers—from Gloria Swanson (in her prime) to Judith Jamison to Maria Tallchief. Indeed, many of these pages deserve hearty applause and will likely whet readers' appetite for more information on these impressive women. All ages.