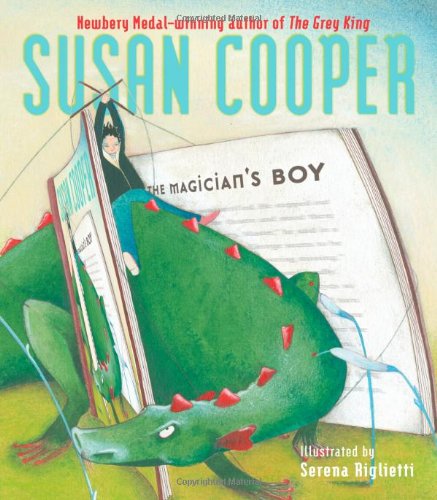 Newbery Medalist Cooper ( ) offers a lighthearted fantasy centering on a Magician's helper. While operating the puppets in his master's rendition of "St. George and the Dragon," the apprentice discovers that the St. George puppet has disappeared. When the angry Magician insists that the lad locate the star puppet, the Boy falls into the pages of an open book and winds up in the Land of Story. There a talking signpost bears the words, "Only a child can find the way/ To bring Saint George back to the play." To accomplish this, explains the post, the Boy must "travel through stories" and choose a nursery rhyme. When he selects the Old Woman Who Lived in a Shoe, the signpost quips (in one of Cooper's characteristically spry lines), "Not a great choice.... She doesn't get out much." Pinocchio makes a rather bland cameo, but the Boy has more entertaining encounters with the likes of the Pied Piper, Little Red Riding Hood and "four and twenty blackbirds," who finally lead him to the Dragon. The signpost reveals a delectable twist as to the Saint's whereabouts. Despite an inventive finale, the narrative falls short of delivering the magic Cooper's fans have come to expect. The theme feels familiar, and the prose lacks the compelling force of many of her previous novels. Riglietti's half-tone stylized illustrations nimbly capture the story's whimsy, whether single-page or splashing across a spread. Recent graduates to chapter books will most appreciate this caper. Ages 8-12.