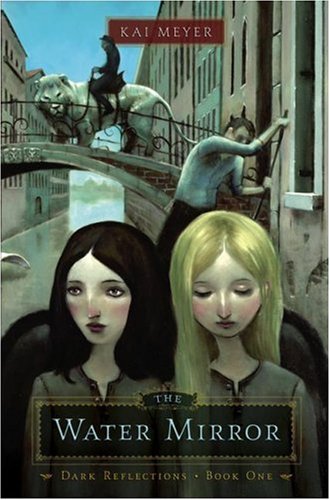 This first installment in the Dark Reflections series, a hit in Meyer's native Germany, is a complex work of high fantasy. In a mythical 1894 Venice, only the Flowing Queen has held off an Egyptian pharaoh's army, and orphans Merle and Junipa, who is blind, are apprenticed to Arcimboldo, who makes "magic mirrors for good and wicked stepmothers." Supernatural elements are, indeed, everywhere—mermaids with "hideous mouth[s] that split [their faces] like gaping wound[s]" are kept as pets, the palace guards ride winged lions made of stone, and Hell has been "proven... to be a real place" at the center of the earth. Merle's only possession (found with her in the floating basket that held her as a baby) is the mirror of the title—an object into which she can reach her entire arm—and feel someone clasp her hand. When she and a rival apprentice, handsome Serafin, overhear a plot to betray the Flowing Queen, they are swept into overseeing her safety. Merle's quest (very much unfinished at the book's end) is not only to protect the Queen but also figure out why she's been chosen for the task. There's a creepy edge to the narrative—Arcimboldo, for instance, replaces Junipa's unseeing eyes with mirror shards to allow her to see. Like the work of Diana Wynne Jones, this novel requires a sophisticated reader to follow its many threads, and one with patience, since most of the tying up is left for subsequent volumes. Ages 12-up.