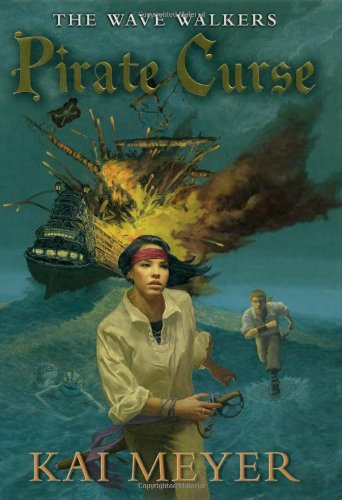 Jolly, 14, has been told she was bought as an infant at a slave auction in Tortuga by Bannon, a pirate captain who named her after the flag flown from his mast. So when Bannon and his crew fall prey to a deadly high-seas trap, Jolly loses the only family she's ever had. She alone survives because she can walk on water. Jolly is a polliwog, a rare creature born following a catastrophic earthquake in 1692, when magic "came out of the cracks in the earth." She washes ashore on a desolate island, where Munk, also 14 and also a polliwog, lives with his parents. Trouble has followed her, however, and soon she and Munk are on the run, told that a gate to a world of dangerous creatures is crumbling, and that only polliwogs can thwart impending disaster. The 18th-century Caribbean imagined by Meyer ( ) contains many intriguing elements—Munk uses "mussel magic" to conjure pearls out of the air, and his parents' tobacco farm is tended by vapory ghosts. But as Jolly and Munk's once-tidy lives spin out of control, so does the plot, which caroms through an exciting, if exhausting, series of swashbuckling adventures and near-misses with rival pirates, carnivorous sea beasts and perhaps too many mystical forces. This first volume in the Wave Walkers series ends at a cliff, but the continual introduction of new characters and confusing elements keeps it from standing on its own. Ages 10-14.