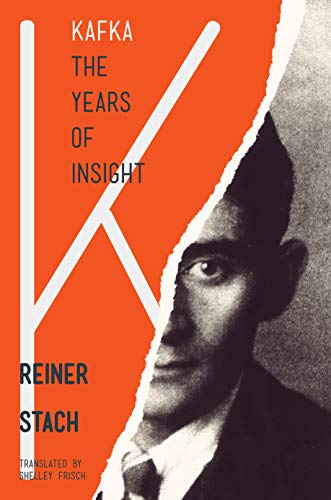 Kafka: The Years of Insight

This well-researched new biography details the last nine years of Franz Kafka’s life and explores the personal, social, and political events that shaped his writing. In 1915 (the year “The Metamorphosis” was published), the 32-year-old Kafka was afflicted with headaches, insomnia, and loss of appetite, trapped in his grinding job at the Worker’s Accident Insurance Institute in Prague, and perpetually warring with his tyrannical father. Kafka’s suffering and perfectionism strained his relationship with his fiancé, Felice Bauer, and took its toll on his writing. After threatening to enlist to fight in WWI, Kafka was given time off by his employers in the summer of 1916, and a brief vacation in Marienbad seemed to turn him around. The following year, though, he was diagnosed with tuberculosis, and the year after with the Spanish flu—both of which hastened his death in 1924. Quoting liberally from Kafka’s letters and notebooks, Stach (Kafka: The Decisive Years) presents Kafka in conflict: someone who shared a near marital relationship with his devoted younger sister, Ottla, but who couldn’t commit to the eligible women in his life; a man interested in studying Hebrew but wary of Zionism; an artist whose fortunes were tied to the city, yet who found his greatest peace growing vegetables in the country. Despite the narrow time frame, this insightful book is likely to become a standard by which future biographies are measured. (July)
close
Details