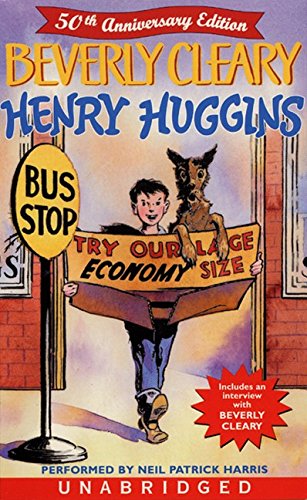 Cleary provides a warm, autobiographical introduction to this excellent adaptation of her first book, which was originally published in 1950. Actor Harris () has enthusiasm to spare in his lively take on Cleary's endearing and humorous work. Third-grader Henry Huggins, who has hair that "looks like a scrubbing brush," is a pretty ordinary kid—a little too ordinary in his opinion. Henry wants some excitement in his life. One day, excitement arrives in the form of a skinny stray dog that befriends Henry at the drugstore. Boy and pooch bond instantly when Henry offers his ice cream cone to the dog, who downs it in one gulp. Henry calls his four-legged pal Ribsy, for obvious reasons, and with more than a little effort and confusion, brings the lovable pet home to his family's house on Klickitat Street via city bus and then police car. Harris proves a versatile performer taking on a whole community of friendly voices, including Henry's exasperated but supportive parents and memorable neighbors Beezus and Ramona. He nails Henry's sense of innocent wonder and his sweet, honest demeanor in every scene, employing an authentic boyish delivery that can amuse as well as tug at the heart—just like Cleary's writing. Ages 8-12.