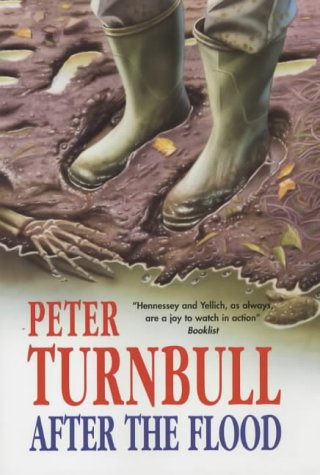 Floods have made a pudding of the Yorkshire countryside, as a closeup of a pair of Wellies standing in the mud so graphically illustrates on the jacket, in the latest smoothly engaging Hennessey and Yellich police procedural from British author Turnbull (; ; ). When the skeleton of a middle-aged female with a severed skull turns up in a farmer's field in a shallow grave exposed by the floods, dental work indicates that the remains belong to Amanda Dunney, a nurse who disappeared 12 years earlier. There's just one problem—forensic tests prove that the skeleton's body belongs to another victim. Amanda was a nasty bit of business who did unthinkable things to her patients. But was that the reason she was done in? And why did her murderer cut off her head and then place it with someone else's decapitated body? And, come to think of it, what did the killer do with the rest of the woman's body (and the other victim's head)? Lightened by informative and amusing anecdotes, such as why medieval doctors removed the heads of the dead and how this came to figure in the Dracula legend, the investigation proceeds clue by clue to a rational and satisfying conclusion. DCI Hennessey and DC Yellich are, as always, heroes who think with their heads rather than their fists. Turnbull has a gift for detail that makes his people and places come to life. This is first-rate traditional mystery entertainment.