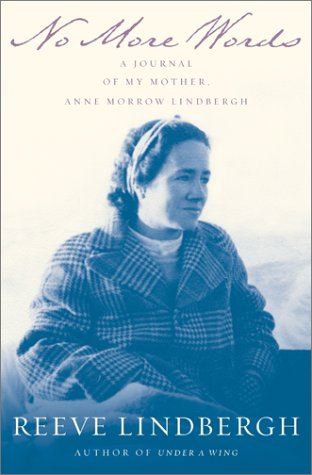 NO MORE WORDS: A Journal of My Mother, Anne Morrow Lindbergh

After suffering several strokes, Anne Morrow Lindbergh (who died this year) spent the last year of her life in Vermont, on the farm of her daughter Reeve's family. Just as Anne undertook in 1955 as a spiritual recon, so Reeve () here explores her feelings about her visibly aging mother. Early on, Reeve dreams she's sitting on a railway bench flanked by two women: the vibrant mother of decades earlier and the ghostly incarnation living with her now. "You just have to take care of her," her "real" mother tells her. "Taking care" is not about feeding and bathing (the domain of some extraordinary Buddhist caregivers), but witnessing her transition from old age into death. Any reader who's cared for an elderly, dying loved one will hear echoes of his or her own wracking doubts. When they're sitting still, staring out into space, we want them to talk or smile, participate "in some way that we can understand." We panic at inappropriate, off-the-wall remarks—was it simply theatrical or has another neurological byway collapsed? And the kicker: however much we've done for them, we feel guilty that we can't keep them from dying. With her mother now shunning speech, Reeve too gravitates to a lean, reporting style. Quotations from Anne's writings are apt but brief. And while the reader expects death in the end, it's still wrenching when it comes.

Gift from the Sea More