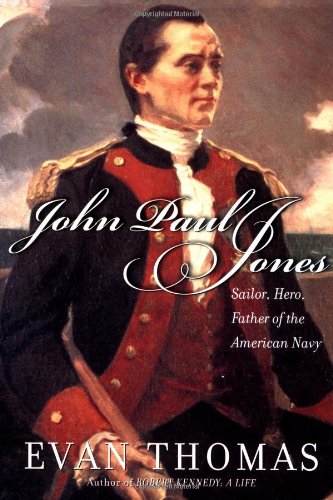 This superlative biography from assistant managing editor Thomas () can hold its own on the shelf with Samuel Eliot Morison's Pulitzer Prize–winning Jones bio, . It does not add much to our knowledge of the events of its subject's life (from his birth in lowland Scotland in 1747 to his lonely death in revolutionary Paris in 1792), but it adds interpretations and dimensions to practically every event that has been recorded elsewhere. Jones's reception in the rebellious colonies, for example, where he arrived as a fugitive from justice, was much helped by his Masonic affiliations. His (frequently successful) pursuit of the ladies raised eyebrows, and his conduct during the famous ship to ship engagement between and was more stubborn than sound. The British Captain Pearson was deservedly knighted for saving his valuable convoy from Jones's attack, and Captain Landais of the frigate may have mistaken his target in poor visibility when he fired some damaging broadsides into Jones's ship, rather than being treacherous or mad as tradition would have it. Jones was clearly prickly, socially ambitious, a difficult subordinate (he alienated every American diplomat in France except Benjamin Franklin) and a martinet as a superior. Jones was also a superb practical seaman (the survival of the frigate in a hurricane is only the most gripping example), a charismatic combat leader and a man with a vision of the American naval future. Both Jones and his latest biographer can justly be praised as masters of their respective crafts.