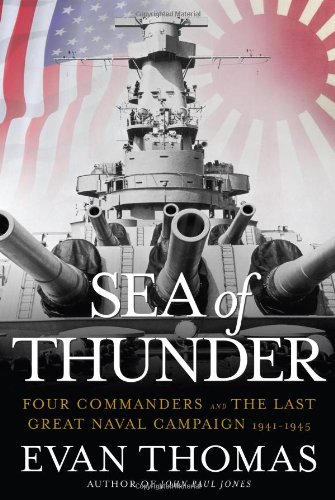 Sea of Thunder: Four Commanders and the Last Great Naval Campaign: The War in the Pacific 1941–1945

Thomas, 's assistant managing editor, turns his considerable narrative and research talents to Leyte Gulf, history's largest and most complex naval battle. He addresses the subject from the perspectives of four officers: William Halsey, who commanded the U.S. 3rd Fleet; Adm. Takeo Kurita, his Japanese counterpart; Adm. Matome Ugaki, Kurita's senior subordinate and a "true believer" in Japan's destiny; and Cdr. Ernest Evans, captain of a lowly destroyer, the U.S.S. . The Americans believed the Japanese incapable of great military feats, while the Japanese believed the Americans were incapable of paying the price of war. Both were tragically wrong. Halsey steamed north in pursuit of a what turned out to be a decoy, while Kurita's main force was positioned to destroy the American landing force in the Philippines. Evans repeatedly took the into harm's way against what seemed overwhelming odds. His heroism, matched by a dozen other captains and crews, convinced Kurita to break off the action. With Halsey's battleships and carriers just over the horizon, Kurita refused to sacrifice his men at the end of a war already lost. Ugaki bitterly denounced the lack of "fighting spirit and promptitude" that kept him from an honorable death. Evans fought and died like a true samurai. As Thomas skillfully reminds us, war is above all the province of irony.