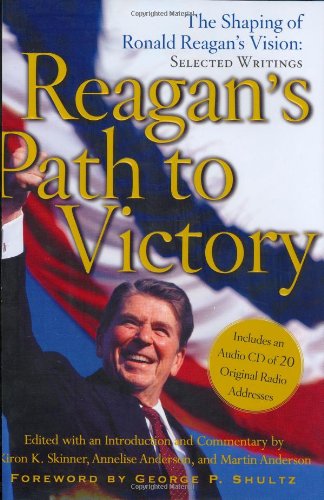 One popular impression of Ronald Reagan is that he was an intellectual lightweight: a dilettante who often dumbed down complex political realities into naïve simplicities. This new collection of 450 policy essays written and recorded by Reagan for his syndicated radio broadcasts between 1975 and 1979 shows otherwise. Edited by Reagan scholars Skinner, Anderson and Anderson (who have also given us the bestsellers and ), this anthology comes with an audio CD of original recordings for 20 of the essays. Through excellent introductions and carefully structured annotations, the Andersons use the chronologically presented essays to demonstrate the evolution of Reagan's thinking as he honed his message to the American people and crafted the platform on which he would win the presidency in 1980. Of more than 1,027 commentaries in total, this book presents only those known categorically to have been written by Reagan himself, on such hot topics as the environment, crime, Social Security, Medicare, drug abuse, energy, education and religion. Thus, the essays provide unique insights not just into Reagan's thinking on policy, but also into his craft as a communicator. And these are insights that both fans and critics will find intriguing.