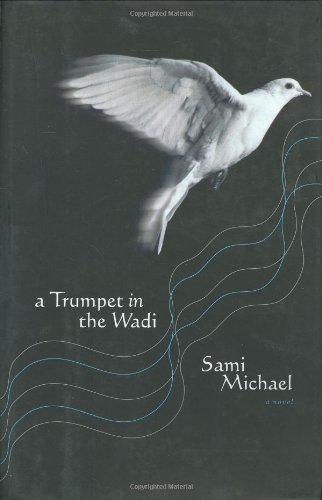 A TRUMPET IN THE WADI

Set in Haifa just before the Israeli invasion of Lebanon in 1982, this spirited, bittersweet novel captures the Arab-Israeli conflict in microcosm. The seaside city is home to a family of Christian Arabs: irascible Elias, the patriarch; his busy daughter-in-law, Umm-Huda; and her fatherless daughters, the beautiful Mary and her older, deplorably still unwed sister Huda. Also living in their crowded building in the wadi, or Arab quarter, is newcomer Alex, short in stature but well-muscled, a Russian-Jewish immigrant who plays his trumpet soulfully in the building's rooftop shed. His music, patience and remarkable physique awaken the interest of reticent Huda, while Mary rejects the advances of Zuhair, the son of their shady Muslim landlord, for the security of plodding Wahid, her Muslim cousin. A trip taken by the two couples to the Red Sea resort of Eilat is an uproarious highlight, and a visit by Huda and Alex to a nursing home to see Alex's ailing but tyrannical mother is a striking set-piece. The translation is occasionally stiff, and Michael tends toward over-explanation, but the novel deals cleverly and humorously with complicated relationships. Against the tragic backdrop of current events, the willingness of Michael's characters to ignore the strictures of individual religious beliefs and to shun fanaticism, is refreshing, though perhaps increasingly hard to credit.