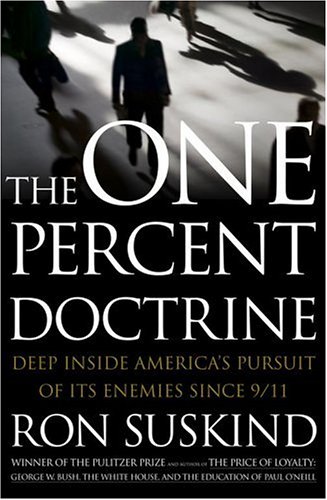 The One Percent Doctrine: Deep Inside America's Pursuit of Its Enemies Since 9/11

In this troubling portrait of the war on terror, America's intelligence agencies confront not just al-Qaeda but the Bush administration's politicized incompetence. Journalist Suskind ( ) follows the triumphs and failures of the "invisibles"—the counterterrorism experts at the NSA, the FBI and especially the CIA—as they painstakingly track terrorists' communications and financial transactions, interrogate prisoners and cultivate elusive al-Qaeda informants. Unfortunately, he contends, their meticulous intelligence-sifting went unappreciated by administration policymakers, especially Dick Cheney, who formulated an overriding "one percent" doctrine: threats with even a 1% likelihood must be treated as certainties. The result was "the severing of fact-based analysis from forceful response," most glaringly in the trumped-up alarm over Iraqi WMDs. In dramatizing the tensions between CIA professionals and White House ideologues, Suskind makes his sympathies clear: CIA chief George Tenet, pressured to align intelligence with administration policy, emerges as a tragic fall guy, while President Bush comes off as a dunce and a bully, likened by some observers to a ventriloquist's dummy on Cheney's knee. Suskind's novelistic scene-setting—"Condi looked up, impatiently"—sometimes meanders. But he assembles perhaps the most detailed, revealing account yet of American counterterrorism efforts and a hard-hitting critique of their direction.