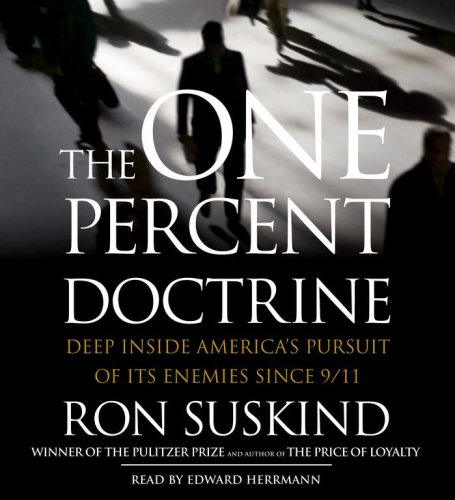 The One Percent Doctrine

Herrmann is ideal for this reading. He has the voice and style of a trusted news anchor, but is also a masterly interpreter of Suskind's ironic and painful narration of how the Dick Cheney/Donald Rumsfeld friendship and power grab got us into the fix we're in today. "Even if there's only a one percent chance of the unimaginable becoming true, act as though it's a certainty," Cheney told CIA and NSA officials in Nov. 2001. "It's not about our analysis, or finding a preponderance of evidence. It's about our response." This separation of fact-based analysis and action, Cheney's 1% doctrine, became the basis of decision making in both foreign and domestic affairs, with the Patriot Act as its legal underpinning. Rumsfeld hired his protégé Cheney during the Bush Sr. administration, and both believed that Bush "missed history's call" by leaving Saddam Hussein in power. Since Bush Jr. had no foreign affairs experience, it wasn't difficult to start pushing him into Iraq even before 9/11 offered such "rationale" as WMDs and an al-Queda connection. "Such alignments," says Suskind, "often turn the wheel of history." Suskind believes George Tenet was so grateful that Bush didn't fire him after 9/11 that, though the CIA knew better, he loyally permitted the endless fabrication of "facts" to become the backbone of public policy statements.