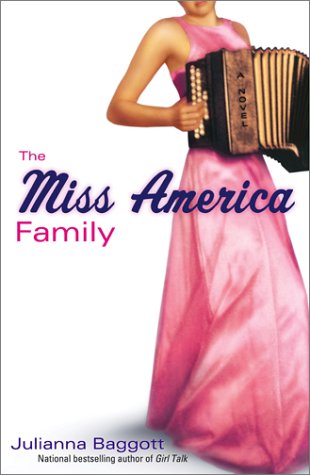 Baggott takes family dysfunction to a new level in a sophomore effort (after last year's ) full of kookiness and calamity. It's 1987, in suburban Delaware, and Pixie Stocker, Miss New Jersey of 1970, and her 16-year-old son, Ezra, take turns narrating this tale of domestic wheeling and dealing. As the novel opens, we learn that Pixie, who divorced her first husband (a handsome household cleaner salesman and Ezra's father) has shot her second (but only in the arm). Why did Pixie shoot dentist Dilworth Stocker? What is it like for intelligent Ezra to have grown up in such a bizarre family? These are some of the questions Baggott answers over the course of her highly readable narrative. Her wit is caustic, verging on mordant: sickly young Ezra, for example, can't have a cat, but he can pet his mother's fuzzy slippers while she purrs; while in the aftermath of the shooting, Pixie tells her daughter, Mitzie, that it was "something like the death of a beloved pet, bound to happen eventually to every American family." The family also includes Pixie's mother, who's convinced humans descended from fish, not Adam, and whose take on the Immaculate Conception is that Mary should have said "no" to Gabriel. Pixie's father, drunk, drowned while attempting a Houdini escape trick, and Cliff, her brother, was killed in Vietnam after the slaughter of a village. From the hilarious—Ezra's seduction by the girl next door—to the hideous—Pixie's beauty contest mentor's self-induced abortion—Baggott explores contemporary "civilized" behavior and the imperfections of a "perfect American family" with wit and grace.