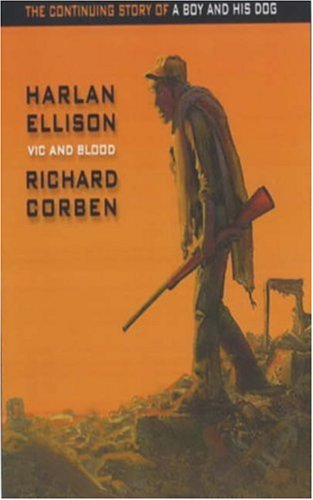 VIC AND BLOOD: The Continuing Adventures of a Boy and His Dog

Admirers of Ellison's Nebula-winning novella (which was the basis of the cult film of the same title) will undoubtedly embrace this perplexing look at the creative process. The author disavows the film's misogynistic conclusion, but he realizes the strength of its characters: teenaged Vic and his telepathic dog, Blood, who are trying to survive in a post-WWIII wasteland. With this basis, Ellison wrote two more short stories about Vic and Blood (after ), explaining more of their prickly but trusting relationship, and showing the emotional consequences of Vic's actions in the original story. Now, Ellison says he's finished telling the overall story by writing as a screenplay that he'll later convert into a novel. In the meantime, this worthwhile book collects the texts of all three existing stories, along with some commentary. Unfortunately, a comics adaptation by Corben precedes each story, detracting from what Ellison is doing. Corben is best when depicting extremely grotesque situations, such as his version of Hodgson's . But that's only one aspect of Vic and Blood's world. When, for example, Vic is trapped in a "downunder"—one of the huge fallout shelters where WASP America has tried to preserve its way of life by severing ties to the survivors on the surface—he is nauseated by its banal wholesomeness, but Corben's inability to execute subtle exaggeration fails to suggest this. Still, an Ellison performance is always fascinating.