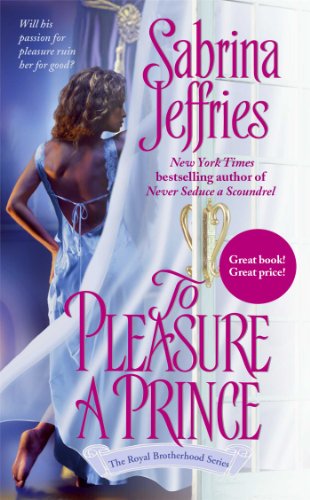 TO PLEASURE A PRINCE

This sprightly Regency romance, the second in bestseller Jeffries's Royal Brotherhood series (after ), focuses on the outcast brother, Lord Marcus North, Viscount Draker, whose illegitimacy—he's the bastard son of the Prince of Wales—and reputation as a gothic villain have kept him out of society for years. When the Dragon Viscount decides his half-sister, Louisa, is in need of a season, he turns to his newfound brothers for assistance. Louisa is a success in London's highest circles, but has attracted the attention of the rakish duke, Simon Tremaine. Marcus is determined to nip the relationship in the bud and keep Prinny, who has recently attempted to insinuate himself into Louisa's life, away from her. Marcus can handle the prince—but he's at a loss when dealing with the Lady Regina, Simon's beautiful sister, whom society has christened "La Belle Dame Sans Merci" because of her quick wit and unwillingness to accept any of the marriage proposals she's received. Marcus soon discovers the passionate heart beating beneath Regina's cool exterior—and that she guards an awkward personal secret. If the resolution of Regina's problem strains credulity at the end, the parallel courtships of the Tremaine and North siblings engages throughout. Readers will eagerly await the third brother's story.