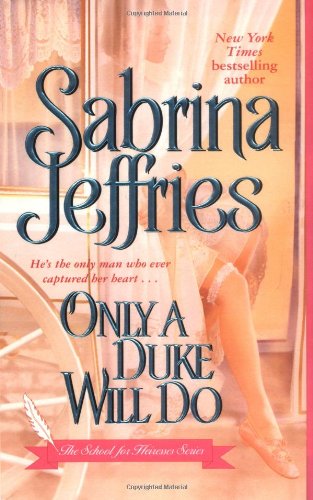 Only a Duke Will Do

The second installment in Jeffries's School of Heiresses trilogy finds Louisa North, illegitimate daughter of King George IV, once again entangled with Simon Tremaine, the duke of Foxmoor. Following his grandfather's advice never to let a woman get in the way of his future, Simon wooed but then abandoned Louisa seven years earlier to make his fortune in India. When he returns to England, Simon's political aspirations are his highest priority—and Louisa makes an intriguing means to an end. In exchange for courting and marrying Louisa—whom George IV is eager to be rid of—the king agrees to make Simon prime minister. As the couple share witty barbs and sensuous trysts, they clash over issues domestic and political—in particular, her charitable work for the women prisoners of Newgate. Romance and intrigue deepen as Simon comes to grips with his feelings for Louisa and the emotional damage he carries, first instilled by the harsh lessons of his loveless grandfather. Bringing together a bold heroine and a scarred hero while incorporating political scandal into a tightly woven romance, Jeffries once again proves her mettle as a first rate Regency author.