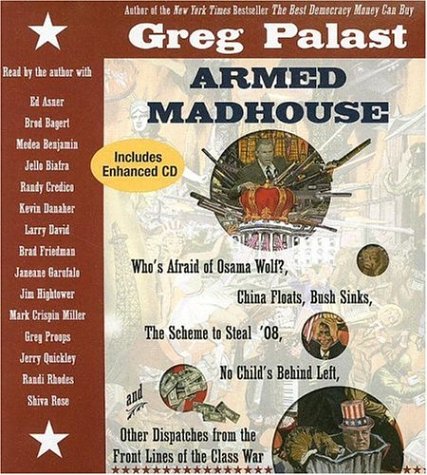 Mesmerizing, if it weren't so depressing, Palast delivers some hard-to-refute facts about the contemporary political scene from the fraudulent elections of 2000 and 2004 to advance economic schemes of the haves to virtually enslave the have-nots to the war in Iraq and the obsession of oil. Palast questions the authority of the leaders of this "armed madhouse," often using their words, documents and resources to bring to light some rather disconcerting truths. As narrator, Palast keeps the pace consistent, taking his time with the more complicated passages, while surging forward on the straightforward parts. His ironic and even deadpan tone provides laughs for his listeners. This audiobook employs a host of cameo voices, including Ed Asner, Janeane Garofalo and Larry David for various quotes. Asner proves engaging with a raspy deep voice that could easily land him a career in audiobooks. Harry Shearer's commentary on gambling and homeland security is also very entertaining. But a few guest vocals may have been better delivered by the author. In the end, it's not the voices that are important, it's what Palast has uncovered.